GELITIN
I Like My Job Five
FRIDAY 20 NOVEMBER, 7:30PM GMT

Jennifer Tee’s Structures of Recollection and Perseverance is a total environment, in a display structure inspired by the exhibition design of Brazilian Neo-Concrete artist Hélio Oiticica. Tee’s Kunstraum exhibition runs in parallel to her show at Camden Arts Centre, the overall project departing from two concepts: Let it come down, alluding to events outside of our control, and Resist, which responds to this provocation both physically and spiritually.

Tee’s installation for Kunstraum combines her own works with ethnographic objects, artefacts, books, plants and works by other artists. A central motif in Tee’s practice is the term ‘the soul in limbo’: the artist imagines the soul as caught in an unnamed conceptual or psychological place on the border between the here and the possible. Structures of recollection and perseverance plays on this theme as it lingers on slippages of death, dreaming and the unconscious. The featured objects have been chosen by Tee for their attitude of resistance towards structures that seem difficult or impossible to change, with many of them employing a specifically ‘female’ form of defiance.

Jennifer Tee: Structures of Recollection and Perseverance includes a reading room selected by poet Jane Lewty. The exhibition is accompanied by a booklet including texts by Thomas Cuckle, Brenda Guesnet and Jane Lewty. 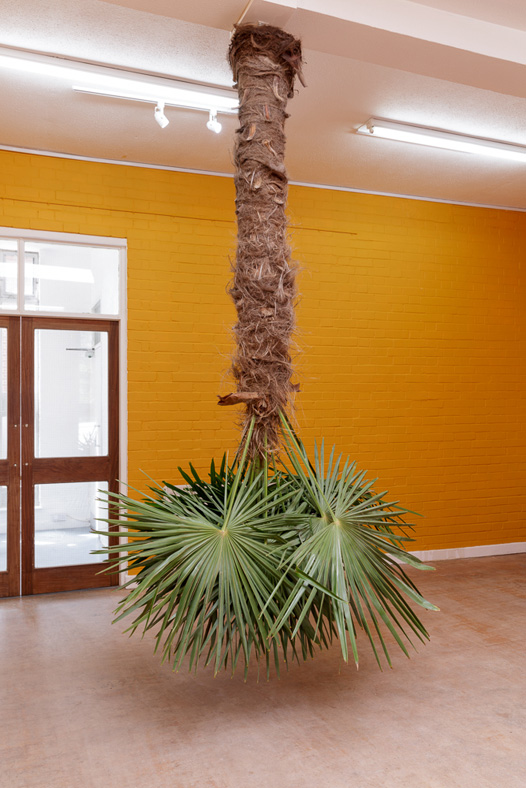 In his memoir ‘Tristes Tropiques’ (1955), anthropologist Claude Lévi-Strauss recalls his visit to Brazil and his instant infatuation with the country. He details his paradoxical experience of being immersed in the culture as a researcher, while simultaneously remaining a detached observer and a perpetual outsider. The palm tree has similarly been violently severed from its roots and turned upside down, caught in a state between exotic attraction and alienation. 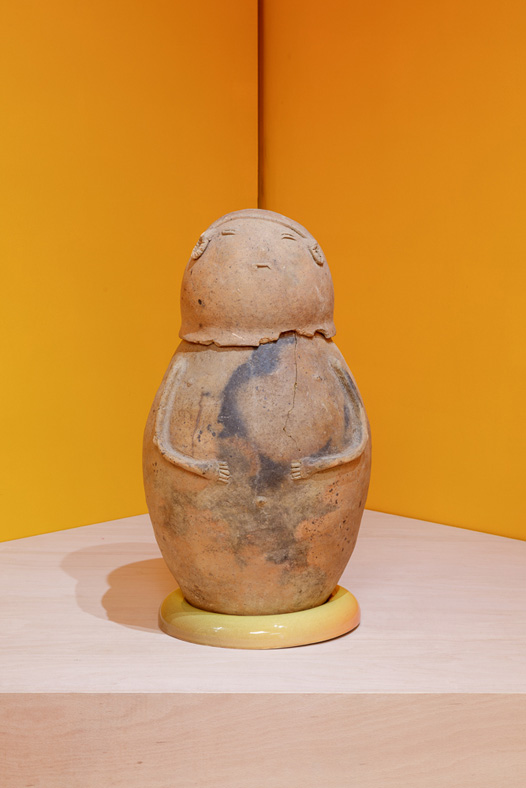 Ancient burial urns such as this one were found in chambers inside deep shafts of tombs in northwestern Colombia, and functioned as repositories for the bones of the deceased after their flesh had been removed. These bones were considered to be seeds from which new life could spring, and the urns were thus vital links to the honored dead. With its womb-like shape, the urn emphasises the proximity between death and fertility, and attains a life-like quality through very simple aesthetic features. 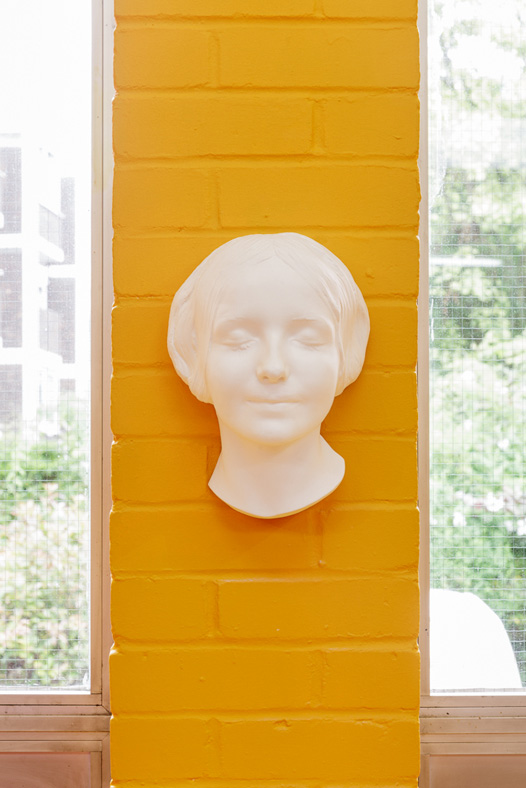 Around the late 1880s, the dead body of an unidentified young woman was pulled out of the Seine in Paris, France. A pathologist at the Paris Morgue was so taken by her beauty — and the resting smile on her face — that he made a wax plaster cast of her face. In the following years, copies of her death mask became a popular fixture on the walls of artists’ homes, and inspired numerous literary works. While we might consider death as a cruel and unavoidable fact, ‘L’Inconnue de la Seine’ almost seems to have escaped it, or perhaps found bliss in her untimely ending.

The caster I visit every day has two masks hanging next to his door. The face of the young one who drowned, which someone copied in the morgue because it was beautiful, because it was still smiling, because its smile was so deceptive – as though it knew. 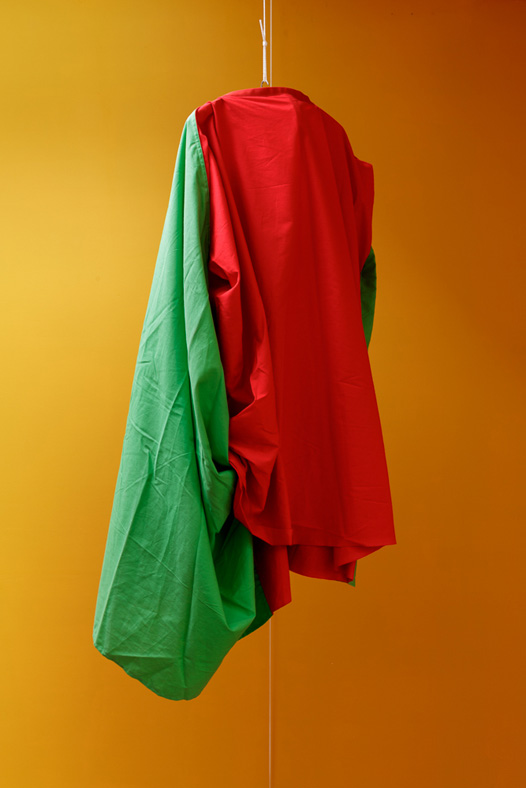 Hélio Oiticica was born in Rio de Janeiro in 1937, and became one of the leading figures of the Neo-Concrete artistic movement in Brazil. While educated in a Western tradition, he became an advocate for a specifically Brazilian sense of aesthetics and cultural concerns. In his work, Oiticica placed a high importance on the lived experiences (vivências) of communities and his audience. The cape is part of Oiticica’s series ‘Parangolé’, with which he aimed to search for an “infinite dimension of colour as it relates to structure, space, and time”. The resulting works were ‘habitable paintings’ in the forms of clothing, capes, banners, or tents.

Oiticica intended for the capes to be dressed in, danced in, and displayed. Visitors are welcome to activate this work through movement and dance. 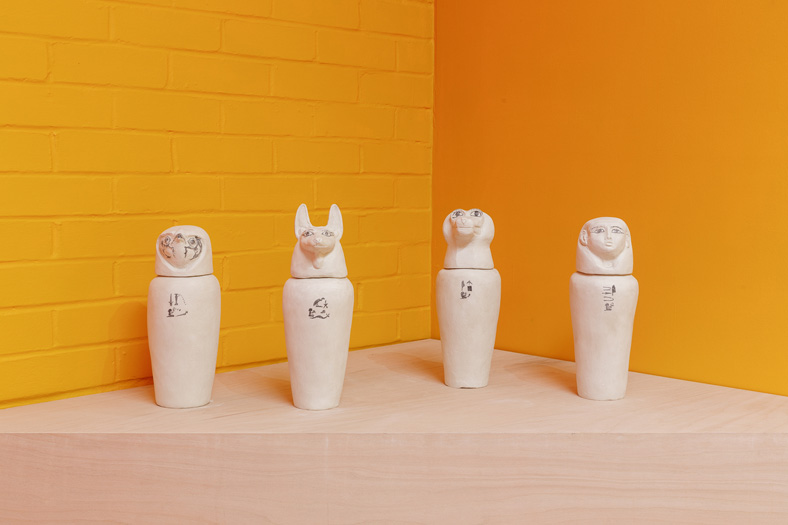 The Ancient Egyptians used so-called ‘canopic jars’ for the safekeeping of particular organs after a person’s death, as they believed that they would be needed in the afterlife. A set would always consist of four jars, each designated for one organ: the stomach, the intestines, the lungs, and the liver. They did not make a jar for the heart; the Ancient Egyptians believed it to be the seat of the soul, and so it was left inside of the body. These replicas of canopic jars highlight the contrast between the contemporary treatment of death within society as opposed to many Ancient cultures, where death occupied a central role in cultural life and was met with a great deal of both material and spiritual preparation.

When from a long-distant past nothing subsists, after the people are dead, after the things are broken and scattered, still, alone, more fragile, but with more vitality, more unsubstantial, more persistent, more faithful, the smell and taste of things remain poised a long time, like souls, ready to remind us, waiting and hoping for their moment, amid the ruins of all the rest; and bear unfaltering, in the tiny and almost impalpable drop of their essence, the vast structure of recollection.

As part of Jennifer Tee’s solo exhibition ‘Structures of Recollection and Perseverance’ at Kunstraum, London, the artist invited poet Jane Lewty read her text from the accompanying publication accompanying the exhibition, followed by readings from the Resist stack of books featured in the reading room of the exhibition. Listen to the recording here: